In addition to SETI, our research group's efforts fall primarily under two themes:

Physical and dynamical characterization of near-Earth objects, primarily with the very powerful tool of radar astronomy

We rely on a combination of telescopic and spacecraft data at wavelengths ranging from optical to radio. The intersection of dynamics and geophysics is a proven area for fundamental advances in planetary science, and our goal is to provide important insights into the formation and evolution of habitable worlds.

Some research areas are listed below.

The radar instruments at Arecibo and Goldstone provide exquisite measurements of the sizes, shapes, spins, and physical properties of Near-Earth Objects.

We observe a variety of asteroids with radar, but we are particularly interested in binary and multiple systems (two or more rocks orbiting each other in space). Our observations can be used to measure the masses and densities of the components, and to study their dynamical interactions in great detail.

The radar work is performed in collaboration with a small number (<10) of scientists who routinely observe asteroids with radar.

Schematic representation of the size of the 2000 DP107 binary system, with the Golden Gate bridge for scale. Click on the image for more radar results.

Detailed measurements of the spin states of planets and satellites can provide a wealth of information about planetary interior structure and about a variety of important geophysical processes. We are interested in measuring small changes in the spin periods of Mercury, Venus and Europa, a satellite of Jupiter.

Currently we primarily use an Earth-based radar technique that provides instantaneous spin state measurements with superb precision. We established that Mercury has a molten core, and enabled a measurement of the core size. We are trying to detect short-term, seasonal, and long-term changes in the spin rate of Venus, which would provide crucial data constraints on the climate and atmospheric dynamics of our sister planet. At Europa, we are interested in estimating the thickness of the ice shell, an important indicator of Europa's astrobiological potential. 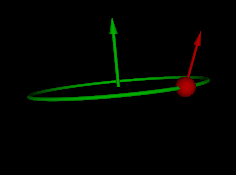 Schematic representation of the spin and orbital orientations of a satellite or planet. Click on the image for more spin results.

We have used data from the Kepler spacecraft to quantify the number of planets and the inclination distribution of planets around stars in the Kepler field of view. We found that most planetary systems have an aspect ratio between that of crepes and pancakes, like our own solar system.

We also found that many planetary systems are packed and live on the edge of stability. If one throws an additional planet into the mix, the whole system goes unstable. 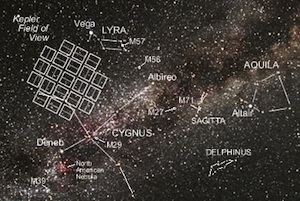 This is the part of the sky that the Kepler spacecraft stared at continuously for several years.

Binary and Triple Asteroids in the Main Belt

We study binary and triple asteroids located in the main belt of asteroids between Mars and Jupiter. We use powerful adaptive optics systems on large telescopes to search for asteroid companions and to characterize their orbital parameters (e.g. the Keck II telescope on Mauna Kea, Hawaii and the Very Large Telescope on Cerro Paranal, Chile).

We have discovered several asteroid satellites, including the first satellite detected around 87 Sylvia, one of the 10 largest asteroids.

Discovery image of a satellite to the 180-km diameter asteroid 22 Kalliope, obtained with the Keck telescope. We named the asteroid "Linus".

Dynamics of asteroids in Icarus-like orbits

This is a long-term program designed to secure high-precision radar measurements (astrometry) of a number of near-Earth objects (NEOs) with trajectories reaching deep inside the gravitational well of the Sun. Accurate ranging of objects in this dynamical class can simultaneously probe asteroid physical properties, solar physics, and fundamental physics. The goals of the investigation are to improve radar tests of General Relativity, to constrain the gravity field of the Sun, and to measure asteroid physical properties. 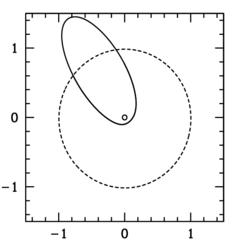 Schematic representation of the orbit of asteroid 2000 BD19, which comes within 20 solar radii of the surface of the Sun. Click on the image for more details.

Some of our research projects require the ability to record signals at a very high speed. Designing and building a low-cost, portable fast sampler was therefore one of my priorities while at Arecibo. These systems have been installed at Arecibo (2), the Green Bank Telescope (2) and NASA's Deep Space Network at Goldstone, California (4).

The sampling system has been used to provide most of the high-resolution images of asteroids obtained in the last decade. Other observations included OH masers and pulsars, the Moon, Venus, the rings of Saturn, and the Earth's ionosphere.

In 2001 I also proposed, prototyped, and tested a chirp system for planetary radar. A similar system has recently been installed at Goldstone.

Radar image of asteroid 1999 JM8. Click on the image for more details.